Within the Center for Disease Control's (CDC) Social Determinants of Health analyses, the Social Vulnerability Index (SVI) uses U.S. census variables at census tract level to help local officials identify communities that may need support in preparing for hazards, or recovering from disaster. This analysis is completed by the CDC's Geospatial Research, Analysis, and Services Program (GRASP) that has created databases to help emergency response planners and public health officials identify and map communities that will most likely need support before, during, and after a hazardous event.

Social vulnerability is a term describing how resilient a community is when confronted by external stresses on human health. These stresses can range from natural or human-caused disasters to disease outbreaks. Social vulnerability refers to the inability of people, organizations, and societies to withstand adverse impacts from multiple stressors to which they are exposed. These impacts are due in part to characteristics inherent in social interactions, institutions, and systems of cultural values. By reducing social vulnerability, we can decrease both human suffering and economic losses.

CDC's SVI uses U.S. Census data to determine the social vulnerability of every census tract.  These are subdivisions of counties for which the Census collects statistical data. The SVI ranks each tract on 15 social factors, including poverty, lack of vehicle access, and crowded housing, and groups them into four related themes. Each tract receives a separate ranking for each of the four themes, as well as an overall ranking. 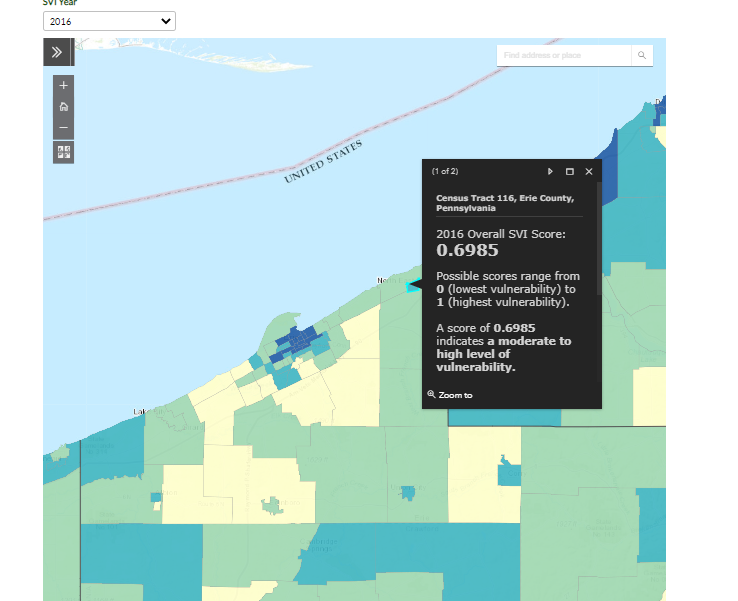 Within the SVI, possible scores range from 0 (lowest vulnerability) to 1 (highest vulnerability). EVS has aggregated the data from the maps and found that 19 of the top 20 highest SVI scored tracts reside within the Erie City limits. These 19 highest SVI tracts represent an estimated 56,327 persons, or just over 20% of Erie County's total population. Comparing census tracts within the Erie City boundary to tracts outside, the following average scores emerge:

As mentioned, there are 15 variables measured which account for the overall tract score, but these 15 variables are measured in 4 separate 'themes'. The themes are groupings of variables which account for a specific grouping of at-risk demographics and are as follows: Socioeconomic, Household Composition & Disability, Minority Status & Language, Housing Type & Transportation.

The SVI scores show that Erie City's census tracts are populated by the most socially vulnerable residents in the county, the theme breakdowns show that those groups are comprised mainly of the minority and non-native English speakers (Minority Status and Language Theme), and those who are poverty-stricken, unemployed, and/or uneducated (Socioeconomic Theme). Under these themes, the residents of Erie City's census tracks are nearly twice as socially vulnerable. The full breakdown of theme variables can be located through the technical documentation found here.

From the perspective of community responses, the information may be best leveraged to anticipate the needs of the affected population; to include integrating vulnerability-specific mitigation and operational strategies into planning, policy, and investments; and to advocate for and to prioritize beforehand unaccounted unique impacts of vulnerable populations during response and recovery.

It is important to remember that this Social Vulnerability Index is just a first step in screening for populations that may be more or less vulnerable. Depending on the situation, different measures could be more or less important and should be looked at more closely. Local information might be more accurate than these estimates and should always be considered if it is available.

Finally, while the focus of social vulnerability is on the human element and protecting our at-risk populations, with preparation comes deliberate actionable steps to mitigate crises and all the logistic and response costs associated therein. At a time when funding is being dispersed in communities relating the COVID-19 mitigation and response, it's crucial to avoid mistakes in emergency financial management, and increase the impact of every dollar on the populations which require it most.

Return to all News Archive