It is important to understand the flow of a population to or from a select geography, in order to shape policy in regards to the ever-changing demographic breakdown of that place. Likewise, to know the ebb and flow of a select demographic can be an indicator of the assets, lifestyle, cost of living within that place.

Overall, the population in Erie County has fallen between 2010 – 2020, excepting for the minority populations which all saw a rise. While the Hispanic population saw the highest increase (+2,625), the Asian population actually experienced the highest percentage change, from 3,245 to 5,498, representing a +69.4% increase.

EVS analyzes the data in each topic category using indicators, which report a targeted and digestible number, rate, or amount to represent Erie County as a whole. While this does not cover every aspect of the topic, it assists in establishing Erie's performance relative to the prior year(s). The indicator for the Migration topic is: 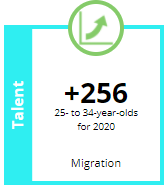 This indicator measures the change in the number of 25-to-34-year-olds in Erie County for latest data year. This age group includes younger workers who play a large role in the region's talent pool.The trend for Migration of 25-to-34-year-olds in Erie County is up and betterfrom 2018 to 2019, with a reported rise of +256 individuals representing +0.7% within the County.