Drug, Property, and Violent crime and sub-categorization, since 2015.

Crime affects quality of life for those who directly experience and witness it, sometimes resulting in long-lasting trauma. Indirectly, it also affects the lives of others in the community, as well housing stability and a community's perceived attractiveness as a place to live, work and do business.

Among the crime categories notable trends appear in property crime which decreased since 2016. After seeing a peak in April 2016 with 202 reported crimes, the average property crimes per month in the last three years has been 92.9. The most active category for property crime has been in the larceny/theft sub-category, with 4,638 instances since 2015 representing 59.1% of all property crime, and 12.9% of all crime in Erie County during the same time.

Violent crime follows a seasonal pattern of occurence according to the data since 2015, with a rise through the April to August months. In Erie County the largest sub-category contributor to violent crime is aggravated assault at 63.6% of all violent crime since 2015.

Drug Possession has shown a steady increase since 2015, with the last full year of data, 2018, showing 521 possession offenses compared to 378 in 2015, a +37.8 increase. Drug sale and manufacturing followings a slightly seasonal trend, with reported offenses since 2015 occurring more often on average in the months between April and August.

EVS analyzes the data in each topic category using indicators, which report a targeted and digestible number, rate, or amount to represent Erie County as a whole. While this does not cover every aspect of the topic, it assists in establishing Erie's performance relative to the prior year(s). The indicators for the Community: Crime topic are: 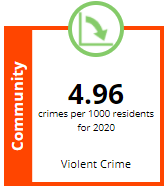 This indicator measures the number of violent crimes per 1000 residents in Erie County for latest data year. The trend for Violent Crime was down and better from 2017 to 2018, with a reported decrease from 5.03 per 1000 residents within the County, representing a -1.4% change. A violent crime or crime of violence is a crime in which an offender or perpetrator uses or threatens to use force upon a victim. 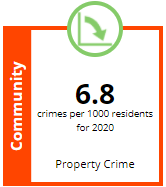 This indicator measures the number of property crimes per 1000 residents in Erie County for latest data year. The trend for Property Crime was down and better from 2017 to 2018, with a reported decrease from 7.5 per 1000 residents within the County, representing a -0.7% change. Property crime is a category of crime, usually involving private property, that includes, among other crimes, burglary, larceny, theft, motor vehicle theft, arson, shoplifting, and vandalism. 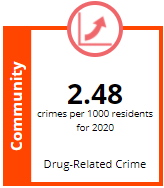 Data from the PA Uniform Crime Reporting System (UCRS), as of 2019.