The percentage of people living in or near poverty is a measure of the overall economic health of a region. It also indicates the level of need for social and government supports.

For populations of color, poverty remains highest for Black/African Americans (25.3%)  and those whom identified as Two or More Races (23.4%), as compared to White (14.6%) citizens. While Erie County's White populations are the lowest of the demographic groups, compared to the PA equivalent population at 12.4% in 2019, it is still high.

Poverty by educational attainment in Erie County closely matches trends in the U.S. for the demographics with less than high school educations, with a steady decline in afflicted populations with increasing educations. Comparatively, nearly a third of Erie's population without a high school diploma or equivalent fall below the poverty level (32.6%), statewide only 24.4%.

EVS analyzes the data in each topic category using indicators, which report a targeted and digestible number, rate, or amount to represent Erie County as a whole. While this does not cover every aspect of the topic, it assists in establishing Erie's performance relative to the prior year(s). The indicator for the Economy: Poverty topic is: 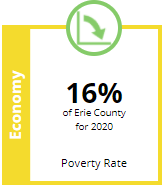 This indicator measures the percentage of the entire population of Erie County which fall below the poverty level for the latest data year. The indicattor trend for Poverty Rate is down and better from 2019 to 2020, with a reported decrease of -0.2% within the County. There were an estimated 41,793 individuals living in poverty in Erie County in 2019.

Data from the U.S. Census ACS as of 12/2020. Population 25 years and older used for Education category.