Why is this Important?

Unemployment rates are a relatively timely indicator of current local economic conditions, particularly recent changes in the employment landscape that reflect the overall health of the economy. Throughout the nation, racial disparities across many indicators of well-being (including unemployment rates) are persistent, troubling and in need of attention.

Unemployment by educational sttainment follows the stepped pattern with increased education, matched by the U.S. averages. The only slight differences occur for the population of adults 25 to 64 years old without a high school diploma, who in Erie County experience a slightly higher unemployment rate at 12.8% compared to the U.S. 10.0%, and the population with some college or an associaes degree with Erie County's at 4.4% and the U.S. as a whole with a higher 5.5%.

EVS analyzes the data in each topic category using indicators, which report a targeted and digestible number, rate, or amount to represent Erie County as a whole. While this does not cover every aspect of the topic, it assists in establishing Erie's performance relative to the prior year(s). The indicator for the Economy: Unempoyment topic is: 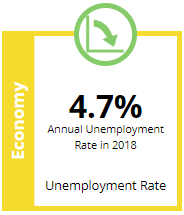 This indicator measures the unemployment rate for the latest data year across all sectors and demographics in Erie County, as a percentage. The trend for Unemployment Rate was down and better between 2017 and 2018, with a reported decrease of -1.0% within the County. There were a reported 6,532 unemployed individuals in Erie County in 2018, a decrease of -1,415 from 2017.

Data from the Census ACS as of 2018. Population 20 to 64 years old used for Education, Race, and Sex categories.