Population demographics by age, race, and location by ZIP, yearly from 2001 to a projected 2025.

Population measures provide insight on how communities are changing in size and composition. The racial and ethnic makeup of a community can offer insight into its levels of diversity, which also may reflect particular challenges and opportunities. The age of a population can affect a community's character and the services that it requires.

EVS analyzes the data in each topic category using indicators, which report a targeted and digestible number, rate, or amount to represent Erie County as a whole. While this does not cover every aspect of the topic, it assists in establishing Erie's performance relative to the prior year(s). The indicators for the Demographics: Population topic are: 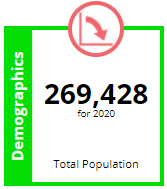 This indicator measures the total population for Erie County for the latest data year. The trend for Total Population was down and worse in 2020, with a reported decrease of -1,330 residents within the County, representing -0.5%. As explored in the Migration topic, the majority of the decrease in population occurred among the White residents of Erie County, at ages 0 to 29 and 40 to 59. 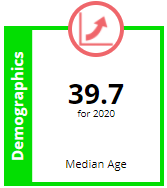 This indicator measures the median age for the entire epopulation of Erie County for the latest data year. The trend for Median Age was up and worse in 2019 with a reported increase of +0.3 years within the County. An aging population carries with it concerns including the decline in working-age population, an increase in health care costs, and all-around changes to the economy. 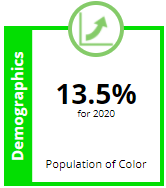 Analysis performed by the Data Center on data from Emsi, as of 12/2020.