The Air Quality Index (AQI) summarizes in one measure the levels of ground-level ozone, particulate matter (such as soot), carbon monoxide, sulfur dioxide, and nitrogen oxide. Exposure to these pollutants can cause short-term health effects such as irritation to the eyes, nose and throat; coughing; sneezing; runny nose; and shortness of breath. Continued exposure can also worsen medical conditions such as asthma and heart disease.

EVS analyzes the data in each topic category using indicators, which report a targeted and digestible number, rate, or amount to represent Erie County as a whole. While this does not cover every aspect of the topic, it assists in establishing Erie's performance relative to the prior year(s). The indicators for the Livability: Air Quality topic are: 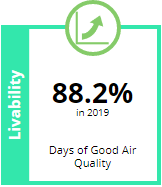 This indicator measures th days in the last full year for which Erie County's air was of good or higher AQI rating. The trend for Air Quality was up and bettter in 2019, with a reported +11.5% increase of good air quality days within the County.

Data from Environmental Protection Agency (EPA) as of 12/2020.