The Population, Labor Participation, Poverty Level, Education, and Salary Ranges for the Foreign-Born and Native population of Erie County.

The proportion of foreign‐born residents who are working is a measure of labor force participation that seeks to include the growing influence of foreign‐born workers. As workforce growth faces  challenges, immigrants will help fill critical workforce needs. Some face barriers to working such as limited English or transferable skills.

EVS analyzes the data in each topic category using indicators, which report a targeted and digestible number, rate, or amount to represent Erie County as a whole. While this does not cover every aspect of the topic, it assists in establishing Erie's performance relative to the prior year(s). The indicator for the Demographics: Foreign-Born topic is: 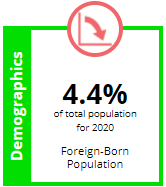 This indicator measures the percentage of the population in a region that is foreign-born, which includes anyone who is not a U.S. citizen at birth. People who become U.S. citizens through naturalization are considered foreign-born. In 2019, a -0.4% decrease puts foreign-born residents at 4.4% of the total county population.

To download the data, select the icon the lower right corner of the table above.