Healthcare and accessibility in Erie County

Population with No Healthcare and those who reported needing a doctor but not being able to because of cost (within one year) by age, sex, educational attainment, and income levels. Banded in 3 year increments since 2011 for both Erie County and Pennsylvania.

Health insurance is critical to accessing medical care and financial stability. People without insurance may delay necessary care and forgo preventive care altogether, which can lead to more serious and costly medical problems in the future. A major illness or injury can financially ruin an uninsured family.

Notable differences between Erie County and the state reside in Erie's reporting on lack of healthcare insurance among ages 18 – 44 being lower than state average, with Erie at 9% and PA at 12%, the gap has actually increased since the 2015-to-2017 year band (previously 2% gap).

Erie follows statewide trends in health insurance coverage by educational attainment, with only a slight difference in residents who are high school graduates or lower reporting in at 12% unable to afford healthcare insurance, whereas the PA state average is 15%. The reported populations who were not able to afford a necessary doctors visit were lower in Erie County as compared to PA; 2% lower for high school graduates. This indicates that residents of Erie may have an easier time securing healthcare insurance.

In Erie County, residents who reported income less than $25,000 were most likely on average to not be covered by healthcare insurance (10%) and not be able to afford a necessary doctors visit (6%), yet these were still lower than the PA state average for the same income range, at 15% and 13% respectively. This could be explained by more of Erie County's residents having healthcare insurance, a lower cost of accessing healthcare in Erie, or just a lower need for doctor visits in Erie as compared to PA residents as a whole.

Both lack of health insurance coverage and the inability to afford a needed doctor visit dropped by a similar degree between the 2011-to-2013 and 2013-to-2015 year bands, from 13% to 12%, both landing at 8% by the 2015-to-2017 year band. The rate increased amongst Erie residents whom could not afford a necessary doctors visit (9%) but remained the same for those who were unable to afford healthcare (8%) for the 2017-to-2019 year band. A note to the limited scope of these variables' trends: according to the PA Department of Health, "In 2011, a new weighting methodology was adopted along with the inclusion of cell phones in the survey. Due to this change, statistics for years prior to 2011 should not be compared to statistics from 2011 to present.".

EVS analyzes the data in each topic category using indicators, which report a targeted and digestible number, rate, or amount to represent Erie County as a whole. While this does not cover every aspect of the topic, it assists in establishing Erie's performance relative to the prior year(s). The indicators for the Health: Healthcare topic are: 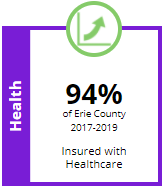 This indicator measures the percentage of the total Erie County population that has health insurance for tha latest data set. The trend for Insured with Healthcare was up and better for the 2017 to 2019 period with a reported increase of +2.0% within the County. 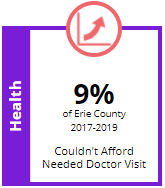 This indicator measures the percentage of the total Erie County population who needed to see a doctor but could not afford to in the last 2 years, for latest data set. The trend for Inability to Afford Needed Doctor Visit in the Past 2 Years was up and worse for the 2017 to 2019 period with a reported increase of +1.0% within the County.