Waste and recycling in erie county

Solid Waste and Recycling trends since 2011, with recycling sub-categories.

Recycling conserves raw materials, keeps waste out of landfills, and conserves energy compared with new material production. Solid waste that is not recycled is typically disposed of in landfills or waste-to-energy facilities. This waste and its collection, processing, and disposal contribute to pollution, greenhouse gas emissions, and depletion of natural resources

Since 2011 there's a steady trend in the decline of Solid Waste tonnage in Erie County, as of 2018 it is down 31%. It's important to point out that during this same time there was a decline in population, as exemplified in the Demographics analysis. Although, there has been an increase in the tonnage of Recycling being done in Erie County since 2014. Within the analysis timeframe, the amount of recycling has shifted from majority residential to majority commercial, by 51% as of 2018.

EVS analyzes the data in each topic category using indicators, which report a targeted and digestible number, rate, or amount to represent Erie County as a whole. While this does not cover every aspect of the topic, it assists in establishing Erie's performance relative to the prior year(s). The indicators for the Community: Waste Recycling topic are: 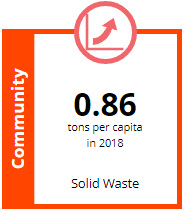 This indicator measures the tons of solid waste divided by the total population over the age of 18. The trend for Solid Waste is up and worse from 2017 to 2018, with a reported increase of +0.01 tons per capita within the County, representing +1.2%. 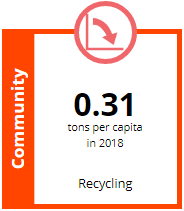 This indicator measures the tons of recycling divided by the total population over the age of 18. The trend for Recycling is down and worse from 2017 to 2018, with a reported decrease of -0.02 tons per capita within the County, representing -6.1%.