Total Graduates and Graduation rate by Race/Ethnicity and Sex, by School District.

High school graduation is the culmination of a successful K-12 education and the gateway to college or employment. Students who do not graduate face the prospect of unemployment or low-paying jobs.

Overall, Female students achieved higher graduation rates (93.6%) than their Male counterparts (90.8%). This trend is reversed in the Union City Area, Northwestern, Harbor Creek school districts, where Male students average higher completion rates. Both Male and Female graduation rates rose from 2017 to 2018, but could be attributed to the consolidation of several Erie City schools, and its weight on the reporting.

EVS analyzes the data in each topic category using indicators, which report a targeted and digestible number, rate, or amount to represent Erie County as a whole. While this does not cover every aspect of the topic, it assists in establishing Erie's performance relative to the prior year(s). The indicators for the Education: High School topic are: 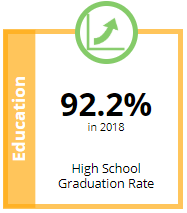 This indicator measures the percentage of Erie County public school high schoolers who achieved graduation in latest data year. The trend for High School Cohort Graduation is up and better from 2017 to 2018, with a reported increase  of +2.7% within the County.