Pregnancy and birth rates are another indicator of a community's growth in human capital. Concerning teen pregnancy, it can derail a young woman's life, preventing her from furthering her education or growing up to be self-sufficient. Babies born to teen mothers are at higher risk of having a low birth weight and of infant mortality compared to babies born to older mothers. They are also at risk of lower cognitive development, poor educational outcomes and living in poverty. Smoking during pregnancy can cause premature births or low birth weight, which presents an increased risk for illness and prolonged medical treatment. Smoking during pregnancy also is a risk factor for sudden infant death syndrome. Early, high-quality prenatal care is critical to reducing risks for complications of pregnancy or birth and improving birth outcomes.

Birth rates show a natural bell curve among women from teenage to 45+ in Erie county, with the highest number of births occurring to mothers who are between 25 to 29 years of age. By race/ethnicity, White mothers represent 72.5% of all pregnancies, and while persons of color represent only 15.9% of Erie County's population, they represent 27.5% of all reported pregnancies between 2016 to 2018.

Teen pregnancy has shown steep decline since the 2006-to-2008 reports, falling from 12.1% to 6.2% of all births within the County, at an average of -1.9% per 3-year increment. Teen pregnancy remains highest amongst White Erie County residents across all analyzed age ranges.

Concerning infant mortality, the rates have remained low since a slight increase in the 2006 to 2010 data bands, with a 0.7% rate from 2016 to 2018. Rates per race continue year-over-year to show a significantly higher rate for the Black population as compared to White. On average, Black infant mortality occurs at nearly 3 times the average compared to White infant mortality in Erie County, and higher than the PA state average. This trend occurs for both neonatal and postneonatal infants for all years under analysis.

EVS analyzes the data in each topic category using indicators, which report a targeted and digestible number, rate, or amount to represent Erie County as a whole. While this does not cover every aspect of the topic, it assists in establishing Erie's performance relative to the prior year(s). The indicators for the Health: Maternity & Childbirth topic are:

This indicator measures the share of girls ages 15 to 19 in a geographic area who have given birth in a given data years period. The trend for Teen Pregnancy was down and better for the latest 2016 to 2018 period with a reported decrease of -0.8% within the County. There were 654 teen births in the 2014 to 2016 period, as compared to 544 teen briths from 2016 to 2018. Pregnancies fell particularly for White teen mothers. 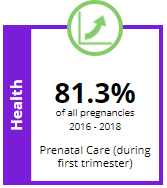 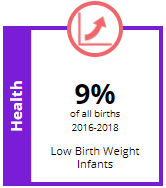 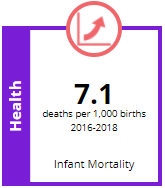 This indicator measures the number of deaths per 1,000 births per year for infants under the age of one year. The trend for Infant Mortality was up and worse for the latest 2016 to 2018 period with a reported increase of +0.8% within the County. There were a total of 63 infant deaths reported.