Households and Families in Erie county

A household's makeup can say a lot about that geographic area's composite population and be an important factor is where people choose to live or not. Familial and marital status both assist in describing that area's attraction to a younger population, whereas household size can be an indicator of shared living quarters for non-family housemates. Overall housing density is another indicator of amenities or consumer establishments.

Erie County trends higher on two-person households, followed by one-person households; these two categories constitute 65.6% of all households in the county. Looking at county-wide housing densities, the only three ZIP codes which feature household densities over 10,000 are 16506, 16509, and 16510.

Despite the population decrease experienced by Erie County as a whole, the overall number of households increased over the analysis time period. Since 2009, households have decreased by +1,382 to a total of 68,493, a -2.0% fall.

EVS analyzes the data in each topic category using indicators, which report a targeted and digestible number, rate, or amount to represent Erie County as a whole. While this does not cover every aspect of the topic, it assists in establishing Erie's performance relative to the prior year(s). The indicators for the Demographics: Households topic are: 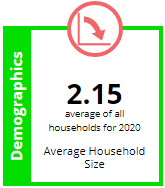 This indicator measures the the average number of people in individual households in a geographic area, including family members, non-family members and children. The trend for Average Household Size was down and worse in 2019, with a reported decrease of -0.03 within the County.This rate drops Erie County further from the Pennsylvania state average household size of 2.20. 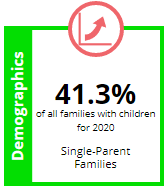