No significant outliers can be found regarding chronic alcohol consumption occurs within residents of Erie County compared to their cohort at the Pennsylvania state level.

While there is no significant difference between residents of Erie County with chronic alcohol consumption behavior according to varying education levels, there is a slight (3%) higher average for residents with some college/associates degree (9%) as compared to statewide averages (6%).

Chronic alcohol consumption fell between the 2015-to-2017 and 2017-to-2019 year bands, by -2% for the entire reported population. At the statewide level at-risk drinking behavior remained at 6% for the reported population. A note to the limited scope of these variables' trends: according to the PA Department of Health, "In 2011, a new weighting methodology was adopted along with the inclusion of cell phones in the survey. Due to this change, statistics for years prior to 2011 should not be compared to statistics from 2011 to present."

EVS analyzes the data in each topic category using indicators, which report a targeted and digestible number, rate, or amount to represent Erie County as a whole. While this does not cover every aspect of the topic, it assists in establishing Erie's performance relative to the prior year(s). The indicators for the Health: Alcohol Use topic are: 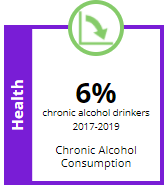 This indicator measures the percentage of Erie County residents reported as having heavy alcohol consumption (consuing 2 or more drinks every day). The trend for Chronic Alcohol Consumption was down and better for the 2017 to 2019 period with a reported decrease of -2.0% within the County.