It is important for local and prospective business entities to understand the workforce by these variables in order to understand the pool of talent and what surplus or deficit of individuals that the County presents, which may be felt by employers.

Of the working-aged population, an expected distribution in the employed population occurs between the ages of 20 to 55, with an average participation rate of 78%. Geographically, the workforce skews younger the closer to Erie City center.

Compared to the U.S., every race/ethnicity in Erie County has a lower labor force participation rate than their national average excepting for the Native Hawaiian and Other Pacific Islander demographic, which for Erie County (72.22%) is higher than the U.S. rate of 66.8%, although this demogrpahic only accounted for 0.03% of Erie County's population in 2018.

In Erie County, workers without a high school degree or equivalent have a participation rate of only 49%, this number jumps to 85% for workers holding a bachelors degree or higher.

The workforce participation rate remained steady for the most part of th elast decade, but since 2015 has fallen -1.4% in Erie County to 60.7% in 2017. The U.S. national workforece participation rate for 2017 was at 63.4%, and has experienced a similar -1.6% drop during the same timeframe.

EVS analyzes the data in each topic category using indicators, which report a targeted and digestible number, rate, or amount to represent Erie County as a whole. While this does not cover every aspect of the topic, it assists in establishing Erie's performance relative to the prior year(s). The indicators for the Talent Workforce topic are: 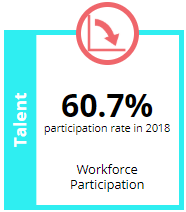 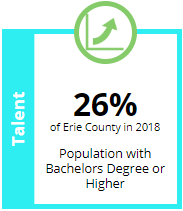 This indicator measures the percentage of the population 25 years old or older of Erie County who possess a bachelors degree or higher for the latest data year. The world is increasingly producing high‐ skilled jobs. Our region's ability to compete with workers and economies  worldwide is dependent on having an  educated workforce. According to the Georgetown Center on Education and Workforce, about 70% of jobs will require postsecondary education by 2018. The trend for Population with Bachelor's Degree or Higher is up and better from 2017 to 2018, with a reported increase of +0.05% within the County.