Median household income is a gauge of the overall economic health of the region and the financial resources of households.

Overall median salaries of males are higher than female workers, particularly in those with less than a high school education level, in which males have a county-wide median salary of $28,125 whereas the female median salary is $15,982.

EVS analyzes the data in each topic category using indicators, which report a targeted and digestible number, rate, or amount to represent Erie County as a whole. While this does not cover every aspect of the topic, it assists in establishing Erie's performance relative to the prior year(s). The indicators for the Demographics: Income topic are:

This indicator measures the median household income in dollars for all of Erie County in latest data year. The trend for Median Household Income is up and better in 2017, with a reported increase of +$1,098 within the County, representing +2.33%. 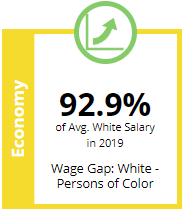 This indicator measures the wage and salary income of adults of color (aged 16-64) as a percent of wages and salary income of white adult (color includes all persons who are American Indian, Asian, black, or two or more races, or those who identify themselves as belonging to another race, as well as those who are Hispanic of any race). The trend for Wage Gap: White - Persons of  Color is up and better for 2019 with a reported increase of +0.39% within the County. This indicates that on average for the total population, a person of color makes 92.9 cents on the dollar compared to their White peers.

The Gini Index is a summary measure of income inequality. The Gini coefficient incorporates the detailed shares data into a single statistic, which summarizes the dispersion of income across the entire income distribution. The Gini coefficient ranges from 0, indicating perfect equality (where everyone receives an equal share), to 1, perfect inequality (where only one recipient or group of recipients receives all the income). More information can be found here.